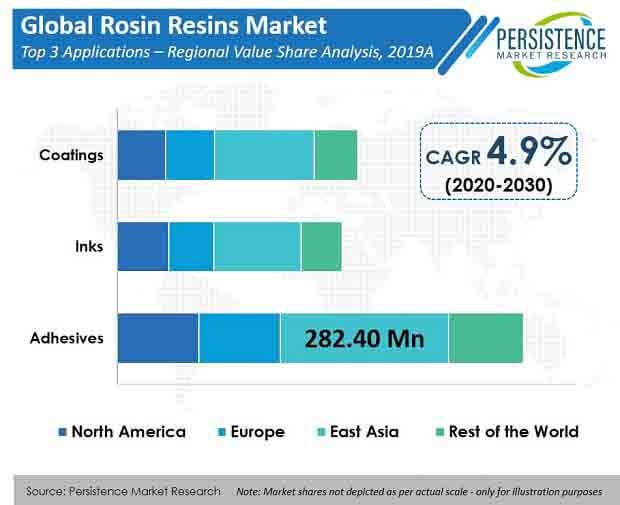 With these chemical modification & formulation the rosin resin is then commercially available in different product types in the market place such as rosin esters, dimerized rosin resin, hydrogenated rosin resin and others. These  product types which are derived through the reaction of rosin resin with chemicals such as esters, acid and alcohols is then processed further to formulate a product which is tailor made according to the application needs.

Rosin resin based products are finding widespread adoption in numerous applications such as road marking, rubbers, paper sizing, coating & inks, adhesives and many more. Gum rosin is suitable for the formulation of adhesives, chewing gums, road marking products and printing inks. On the other hand tar oil resin finds its usage in adhesive formulation, water proofing application, varnishes and enamels. Rosin resin is finding growing adoption in printing inks formulation and now preferred over traditional materials due to its better sticky properties which helps in efficient printing. Also new developments are also taking place across the globe in order to increase the application universe for rosin resin. Rosin Resin is used for the formulation of nanoparticles and Nano capsules which is an integral part of pharmaceutical industry.

Rosin Resin and its derivative products are getting traction and the demand for these product rose significantly in last few years owing to its usage in wide application base and enhanced properties on the traditional products. Adhesives, coatings, printing inks, laser printing are some applications showing tremendous adoption in numerous end user industries such as automotive and construction which further upturn the demand for rosin resin in the market. New product development such as the formulation of microcapsules and nano particles enables its adoption in pharmaceutical industry which further increases the rosin resin demand. Rosin resin is also used in the formulation of turpentine oil which finds its application in growing furniture fabrication. However the increasing base price of rosin resin is expected to hamper its market growth. Also increasing in number of substitutes of rosin resins will further dent its market growth.

On the basis of Application, the Rosin Resin Market can be segmented as:

The Global Rosin Resin Market is segmented into the seven key regions: North America, Latin America, Western Europe, and Eastern Europe, Asia Pacific Excluding Japan (APEJ), Japan and Middle East and Africa (MEA). As of 2016. APEJ is figured out as a prominent region in terms of production and consumption of rosin resins. In APEJ, China is the emerging as a leading producer for rosin resin due to the availability of large number of pine trees. Latin America is also registering the significant growth in rosins resin consumption due its large scale use in the formulation of turpentine oil. North America is showing steady growth due to expansion in application industries.

Examples of some of the market participants in the global Rosin Resin Market identified across the value chain include:

Feel free to contact us for any queries – News@kyn24.com